Stretching through the middle of Balikpapan, it’s the only miniature primary and secondary virgin forest in East Borneo. 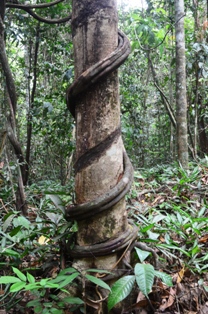 The Wain River forest is in the northern part of Balikpapan, East Borneo. Its a conservation and research area with diverse life forms and extraordinary tourism potential. This is a lowland forest with three forest types: marsh forest, dipterocarp forest, and riverine forest. The forest area was first designated a “covered forest” by the King of the Kutai kingdom in 1934. Then in 1983 the 3,925 hectare area surrounding the Wain River was declared a protected forest by the Minister of Agriculture.

In 1988, the Forestry Minister designated a further 6,100 hectare at  Wain River as protected forest, bringing the total protected area to 10,025 hectare. Since then it has enlarge to 11,000 hectare by Indonesian government.

The Wain River forest serves as a source of clean water for both the residents of Balikpapan and the needs of the oil industry of Pertamina. This lowland forest covers a limited area, its home for many creatures rarely found elsewhere, including sun bears and no less than nine species of primates. Such as silvery gibbons, proboscis monkeys, orangutan, black leaf monkeys, pig tailed monkeys, and macaques.

The orangutans that inhabit this forest were released back into the wild by Borneo Orangutan Survival (BOS) gradually starting in the early 1990, at least around 80 individuals in all. The forest is also the habitat of many bird and insect species.
The forest also contains many lowland plant species, including several rare species, such as various types of pitcher plants, orchids, and original Balikpapan ginger (Etlingera Balikpapanences), which is found only in this forest.

Explorations began with a view of a large, calm reservoir, which immediately transfer from the noise and pollution of the city. This reservoir provides the clean water supply for the Pertamina housing complex and the oil refinery in Balikpapan, derives from two rivers. The Wain and the Bugis river, which flow through the Wain River Forest area. The fresh air and the panorama of the forest are very relaxing and the bird songs further enhance this feeling. 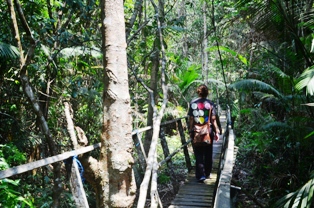 There are 400 meters long trail along a wooden bridge that runs past the Sungai Wain reservoir into the forest to start the trek. The dense forest is full of large trees to observe and study. Some ants passed into large group nest in a large moss-covered tree and saw many small, rare creatures. This particular trail has a wide variety of trees and if you’re lucky you can see larger creatures, such as proboscis monkeys and sun bears.

The sing of the bird are everywhere. The forest is so dense that it’s very easy to get lost if you’re not accompanied by a forest ranger. This 8-kilometer trail takes five or six hours and takes you through a large part of the Sungai Wain Protected Forest ecotourism area, with the possibility of encountering orangutans and sun bears; there are around 60 sun bears in the forest. Another, even more challenging trail takes at least two days.